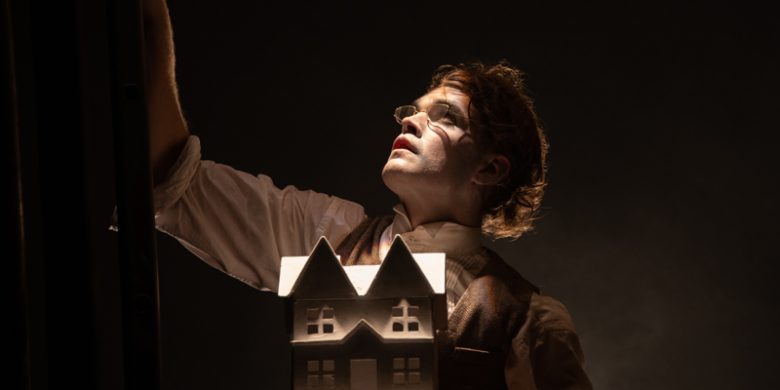 Simon plays the roles of Tulkinghorn, John Jarndyce and Snagsby in the adaptation of Bleak House by the David Glass Ensemble 26 – 28 September at the New Theatre Royal, Portsmouth.

London born & raised, Simon trained at Drama Centre and the Ecole Jaques Lecoq in Paris and has been performing with companies including Flabbergast Theatre, Tooth & Nail, Breadknives, BAC, Good dog and Created a Monster. He is leading on several of his own projects as writer/director and teaching theatre globally for the David Glass Ensemble.

Q. What or who got you interested theatre? Did you take part in any productions at school?

A. There was a drama club I started going to when I was 7 years old; I remember feeling ridiculously free, playing lions and monsters running around, screaming, going crazy. Maybe it was the first place that made me feel at home venting in a drama space. At school, the theatre was similar: our drama teacher would speak to us openly, informally about life, people and plays. We had a blank canvas to play the games we wanted and tell the stories we wanted, which meant writing, devising and playing everything from Sartre to Pinter to Apocalypse Now to – and this was my breakout – Toad of Toad Hall. The theatre was this big, dark open space with fake guns, photos of past performances; it was separate from the rest of the school and we felt we could be ourselves there, naughty and independent.

Q. Are or were any members of your immediate family involved in the theatre?

A. No. Maybe that was the charm, the fact that I had found something that was mine, distinct from my family.

Q. Who is the most inspiring person you’ve worked with and why?

A. I wish I could skirt around this answer, but I can’t: David Glass. It’s just that he is a true artist and teacher who lives by the principles of his work, improvises constantly, and has used the arts not only to touch theatre audiences of the UK and beyond for 40 years, but has used creativity to effect real change in people and societies that have needed it. The Lost Child Project, the AB project, his work in social development with the UN and Save the Children has shown me that creativity is so much more fundamental to humanity than the art gallery or theatre. As artists we have the capacity to effect real, human, emotional transformation in our society and I cannot imagine a time in history where that has been more prescient than it is today.

At a base level, it is just extraordinary fun, touching and fascinating being in the rehearsal room with him: somewhere between a scientific laboratory and a teenager’s bedroom.

Q. What formal training have you done?

A. I studied for 2 years at the Lecoq school in Paris; it’s a movement and improvisation class every day and students make their own pieces each week to be torn apart by teachers every Friday. It’s pretty much an art school for people that want to make theatre.

Then I went to Drama Centre to get my MA in Acting, more traditional conservatoire training: voice, speech, ballet, Stanislavski, Shakespeare and seven different kinds of narcissism.

Both were excellent, challenging, completely opposing experiences of what performance training means to people.

Q. Do you have any specialist skills – anything from stilt walking to dress-making – which you work into your repertoire?

A. Quite depressingly, no. The thing I always wanted to specialise in was play, the ability to transform and liberate myself physically and emotionally into my imagination at the drop of a hat. It’s hardly stilt-walking and I certainly wouldn’t say I’m anywhere near a specialist. Yet.

Q. Which experience/role do you regard as the highlight of your career to date?

A. I teach physical theatre and mask workshops in China for the David Glass Ensemble and experienced a modicum of what the creative arts can do for people really looking to expand themselves on my last few visits. I think we underestimate the need for the arts to humanise us in the west because we think our egos are our humanity; in a culture only a generation away from warfare and famine, a simple mask workshop connecting them to authentic movement and a transgressive playfulness felt strangely revolutionary.

It has been my acutest experience of the real-time, human value of my work for people who are strangers looking to me to lead them into their own imaginations.

Q. What has been your most embarrassing moment?

A. I’ve played whole performances with a tear in my trousers’ backside; I’ve blown snot down my face (on purpose) for a whole minute while wearing a red dress and wig; I’ve been a part of so many unfunny gags, fluffed lines, fake tears and terrible theatre… the vast majority of my embarrassment was while experienced at school, learning to be an actor and forget my shame. As a professional actor, while I very often feel ashamed, self-critical and bashful at a curtain call or coming off stage, I am simply not allowed or do not have the time to feel embarrassed anymore.

Q. What play would you most like to direct and why?

A. I want to adapt Haruki Murakami’s Kafka on the Shore for stage and direct it; the surrealism, its beautifully, delicately affecting relationships, talking cats, the forest of ghosts… it’s just a brilliant reversal of the Oedipus myth and story of a boy becoming a man in the weirdest way possible. Or an insane, tremendous, truly chaotic version of The Bacchae in an ancient Greek amphitheatre.

Q. Any big plans for the future?

A. I’m writing a book with David Glass about devised theatre and creative practice, so it will be fun to see what comes out of that. My first self-devised and directed piece is premiering at Rich Mix in Shoreditch in November; an exciting project about orphans, freedom and growing up. Otherwise, I just want to keep on working with artists who are better than me in theatres and mediums that are bigger than me; I’m becoming better at working on screen and I’d love to be a part of some really interesting film and tv if I get the chance.

Q. Any tricks or useful tips to pass on to other actors/directors?

A. Do what other people are not doing.

Q. Tell us about the show. What can audiences expect?

A. This is an adaption of Dickens’ Bleak House that has distilled the many, many, many narratives of the novel into the story of a young woman and the machinations of the law. It is not a sweet, temperate, realistic adaptation suitable for BBC. It is visceral, physical and visual: it involves grotesque satire and real cruelty, but it is ultimately a deeply moving, melodramatic story of family and people’s search for love in the face of horrific adversity.

Expect stunning imagery and naughty humour; expect to be provoked and moved in equal measure.