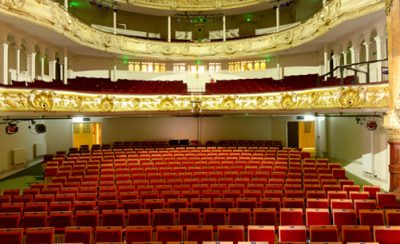 The line between security and tyranny has rarely been so stimulatingly debated .The Guardian

Thirty participants are invited into an intriguing theatrical game world, exploring security, profiling, freedom of expression and privacy in the age of cyber surveillance. Mobile throughout the performance, participants collaborate, compete, investigate, debate and spy on each other.

Depending on personal and group responses, participants witness different perspectives on the action, gathering evidence from dramatic scenes and documentary media that colour their views and how they play the game. Each performance is unique in that the audience dynamic influences the outcome.

A multimedia tour de force in English, Farsi and Arabic, this radical game of secrets is “a show that gets under your skin.” ***** – The Scotsman

“Entertaining, insightful and you can expect to come away feeling very acutely reminded of our shared humanity.” — Irish Times

£10 tickets for Under 25s available (To book these seats you must be between 16 and 25 - Limited availability, collection only with ID).

Please note the performance on Monday 17th September at 7pm is Pay What You Can. Just book your seat, and after the show just Pay What You Can, whether it’s 10 pence or ten pounds.

Recommend Foreign Radical to a friend via email