University of Portsmouth reveals the name of the new CCi building 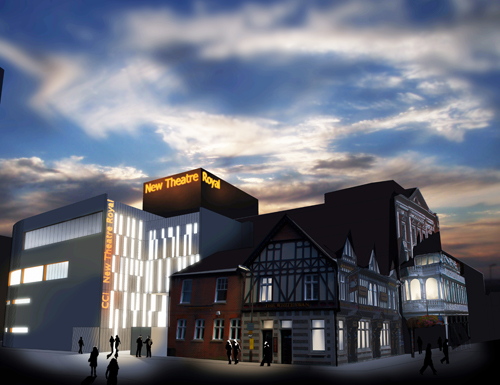 We can reveal that the name for the University’s new extension to the New Theatre Royal will be White Swan Building.

After careful deliberation, the University Executive Board decided that there were several compelling reasons for so naming it. It is in keeping with the University’s practice of naming a number of its buildings after locations – either roads adjacent (Eldon) or sites vacated (St. Andrews House) – and there are several historical and symbolic precedents that informed the decision.

The corner of White Swan Road and Guildhall Walk, where the New Theatre Royal’s front aspect is located, is the site of the Brewhouse & Kitchen, Portsmouth’s first craft beer pub and independent micro-brewery. Making and serving Hampshire ales, this independent establishment was previously know as the White Swan Tavern, its current architecture replacing an earlier public house of the same name thought to have been built in the mid 17th century just outside the old town walls, by the Landport Gate.

Just behind the site of the historic White Swan Tavern was an area of Portsmouth called the Swan Fields, where there were extensive ponds frequented by swans, possibly cared for by the nearby monks of Magdalen Chapel. The ponds provided fresh water for the town of Portsmouth but have now vanished beneath modern buildings although flooding of basements is a frequent occurrence in this area.

Beyond the historical links of the White Swan name to that location is a wider cultural significance of the bird itself. Most commonly seen in the UK, the White Swan mates for life, with the male helping with nest construction and incubation. All UK swans are the property of the crown, and they are protected from being moved, even if inconvenient.

Although the White Swan is mute, the name swan is derived from the Old English swan, and this in turn is derived from the Indo-European root swen, to sound or sing. White Swans are therefore variously symbolic of loyalty steadfastness, equality, vocal performance, and permanency. All of these being rather appropriate characteristics for our institution and new building.

These symbolic qualities have led to Swans appearing throughout various cultures, as examples of beauty (The Ugly Duckling story), love and fidelity (Wagner’sLohengrin and Parsifal operas), liberation (the Irish legends of The Children of Lir and The Wooing of Etain), and transformation (from mute swan to swansong), light (Apollo’s chariot being pulled by swans), purity (the Norse mythic poem Volundarkves), eternal life (the Finnish epic Kalevala), sanctity, prudence and discrimination (Goddess Saraswati’s vehicle), spirituality, transcendance and grace (Vedic literature).

All of these references, and the historical relevance to the locality, have served to inform the title of the new building in which drama, performance, theatre, and media activity will further its cultural resonance.

The building’s name has been approved by the Board of Governors.

Content courtesy of Catherine Harper, Dean of the Faculty of Creative and Cultural Industries.