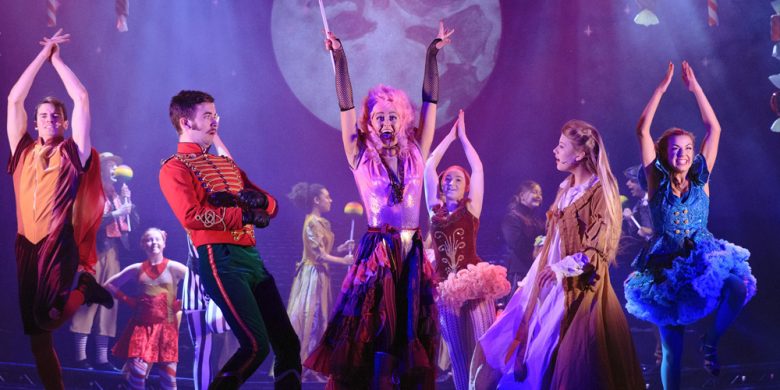 From Strictly Come Dancing to the New Theatre Royal Stage, Sarah-Faith Brown is appearing now as the famous Sugar Plum Fairy in our Christmas musical – The Nutcracker.

So, the Sugar Plum Fairy is, I would say, fruity. She has two personalities, one is very zen, the other very hyped up on sugar. She transitions between these two extremes, which is very comical. She also finds a love interest, but I’m not saying who! Oh and she has a strong Yorkshire accent, which is very close to my native Teeside so that’s great to play.

I also play Prince Boris of Pirlipat, who loves his food. He has two loving parents but he is slightly dim. He’s fun to play but a challenge physically. His is a whirlwind of a scene, with an awful lot of sausage.

What are you looking forward to about performing in The Nutcracker this December?

Being in a Christmas extravaganza like this is brilliant, its’s different to a panto, very musical. It’s spectacular, lots of fun, and very suited to all ages. It’s bright and magical for the children, with plenty of humour for the adults. I also have a wonderful duet that I’m very excited about. It’ll be great to do a run with such an amazing cast. Everyone is just so lovely.

What do you associate with Christmas?

Please sum up this production in three words?

I hear that before you joined us for rehearsals, you were involved with a rather well known TV show…?

Just a little well known! I’ve worked on Strictly Come Dancing for the last two years as an assistant choreographer. I work on group numbers with the pro dancers, and with celebrity and professional couples. Last year I assisted Ashley Roberts, from the Pussycat Dolls, and Pasha on their Halloween Charleston, then I worked on the group number for the Christmas Special. This year I assisted on the Halloween group special, for celebs and pros, and Emma and Anton’s Musical Theatre jazz piece. I assist choreographer Alan Burkitt, I’m so grateful to have been brought into the Strictly family by him, he’s brought a lot of other work my way too.

If you could choose anything, what would you ask Drosselmeyer to create for you?

A money tree! Because I think everyone could do with a money tree in their life. Then I could take cuttings from it and make money trees for everyone!

Sarah Faith Brown stars as the Sugar Plum Fairy and Prince Boris of Pirlipat in The Nutcracker – A Christmas Musical Spectacular, from 13 – 31 December 2019. Click here for more information and to book tickets.