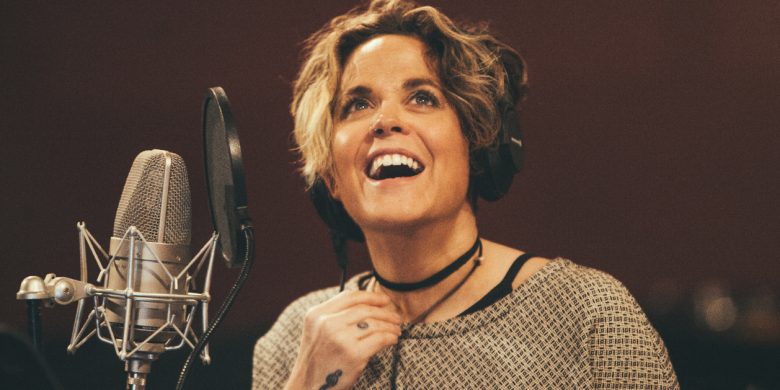 “You watch Stormzy at Glastonbury where people are making a really strong point about something, about certain issues, but with music it’s drip-fed in a way that feels exciting. And I think, emotionally, people who are going to the theatre are ready to be open to these things.” Grammy-award-winning songwriter Amy Wadge is discussing what excites her about creating her first stage musical with south Wales company Theatr na nÓg. Eye of the Storm is a family show that confronts issues as weighty as young carers, the drop-off in girls studying science and the climate emergency, but Wadge is determined her music should make it an uplifting experience for audiences.

You may not know her name, but you will definitely have heard Amy Wadge’s music. Her long-running song-writing partnership with Ed Sheeran has yielded numerous worldwide hits – as well as a Grammy award in 2016 for Thinking Out Loud. She has gone on to work with artists as diverse as John Legend, Kylie Minogue, Keith Urban and Camila Cabello.

When we meet in a music studio in her converted family farmhouse that overlooks the verdant Ely valley, she’s still recovering from jetlag following one of her regular assignments in Nashville. She and Theatr na nÓg’s director Geinor Styles are polishing some new songs for Eye of the Storm which, after a short run in 2017, is returning for a UK tour this autumn. Wadge is a woman in demand, and so what attracted her to work with a small subsidised theatre company based in Neath?

“I knew of Theatr na nÓg and who Geinor was, but that was it, to be honest,” she admits.

“Thinking Out Loud had literally just come out so life hadn’t gone completely crazy yet, and I got an e-mail asking if I wanted to provide some country songs for a show Geinor was developing. At that point, I wasn’t going back and forth to Nashville as much, so any chance I got to write country, I jumped on it. Geinor and I met, and we connected straight away on the musicians we love.”

The choice of a country-style songbook is curious, perhaps, for a musical set mainly in a caravan park in south Wales. “The main character, Emmie, dreams of being in America, chasing tornadoes,” Geinor Styles explains. “Driving those long distances, with that amazing landscape, it only ever seems to be country you hear on the radio there. The songs can be so poignant and yet really clever and ironic. Country tells a story within a song, so you don’t have to play tricks with the audience.”

Wadge agrees about the choice of genre: “Obviously, country is usually Texas or Tennessee or wherever, but there’s something about Wales that, for me, lends itself to country music more than anywhere else in Europe – it’s got the small-town vibe and our character lives in a trailer park, albeit in Wales. The story talks about coming from nothing, and about hardship – the same stuff country music does.”

Initially, Styles and her team developed Eye of the Storm through drama workshops conducted with young carers in the Valleys, facilitated by Barnardo’s. “One of the things they said to me was, ‘Why would you do a play about being a young carer? We don’t want to be labelled as that – you’re not treating us as normal kids…’” Styles recalls. “We then realised we needed to make the show about the aspirations of someone who just happens to be a carer.”

The carer in the story is Emmie, a 14-year-old who dreams of studying tornadoes in the USA. She is a character who eschews the depressing statistics of females being under-represented in the STEM subjects (science, technology, engineering and maths) in our schools, then in the wider world beyond (in 2018, women made up just 14.4% of the STEM workforce). Emmie’s journey leads her to confront issues of climate change and the global crisis we face. It’s an ever more pressing problem that has presented Styles and Wadge with a new creative challenge as they prepare to relaunch the show two years on from its premiere. It was at that premiere that Louis Michaud, a Canadian scientist acting as the show’s consultant, observed the power of the play’s message. Michaud’s own invention – the Atmospheric Vortex Engine which artificially generates tornadoes – is being developed to create sustainable energies and features prominently in Eye of the Storm.

“Originally, all we wanted was for Emmie to be a girl with big aspirations, who invents something to do with extreme weather systems,” says Styles. “It was only when Louis Michaud told us that what we’ve done is create a climate change musical, that we realised how important that aspect was. Since 2017, those issues have become a huge priority for us all, and so we’ve tweaked a lot of the things about that. Emmie realises that what she does could change the world.”

Daunting issues, indeed – so does this impinge on the process of creating a family musical that’s entertaining as well as political? “If you’re clever about it, then you make something which firstly people will like, that’s not too preachy…” Wadge says. “It’s not too highbrow but it says something, and people accept these messages in musicals much more these days.”

Amy Wadge’s recording studio is adorned with gold discs, various awards and framed photographs of her hanging out with the likes of Stevie Wonder and Elton John. Could she be tempted away from the recording world again to write more musicals? “I hope musical theatre features in my future, and I’ve had offers, but it’s a different challenge. In my usual job, I have to write to a strict brief, and a record company will tell me this has to be a hit or whatever, so to be given a script like Geinor’s and to be able to do what I want with it-… well, it was freeing. It’s been a real gift.”

Click here for more information and to book tickets.

Nicholas Davies contributes regularly to The Stage and is a freelance writer of screenplays, novels and articles. He is based in Cardiff and previously spent 17 years working for the Arts Council of Wales covering the performing arts.