Behind the scenes with Le Navet Bete 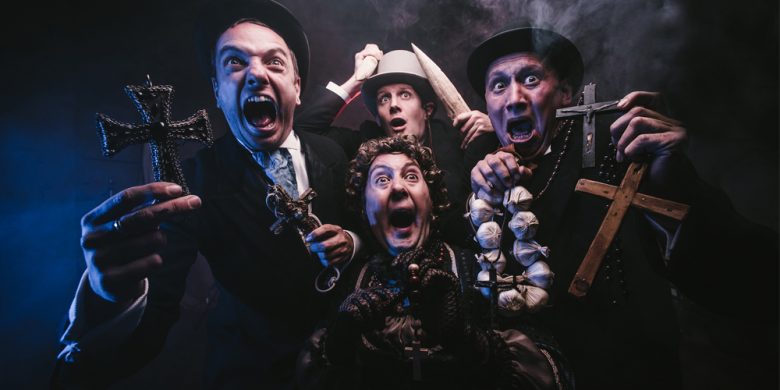 Dracula: The Bloody Truth is a hilarious family-friendly adaptation of the classic novel. Go behind the scenes with the award-winning Exeter based company Le Navet Bete.

Tell us a little about yourselves.

The company formed in 2007 after we all graduated with a Theatre & Performance degree from the University of Plymouth. In 2008 we took our first show, Serendipity, to the Edinburgh Festival where we received many 5 star reviews and a Total Theatre award nomination. After this we travelled the world a bit, performing as far as Mexico, and also into Europe and then after doing some touring we came back to Devon in 2011 to establish ourselves as a South-West based company. We then secured a residency at the Exeter Phoenix and is where we have been creating all of our shows before touring them. 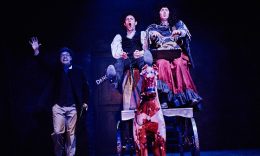 Why did you choose to adapt Dracula for the stage?

Choosing to do Dracula was actually a pretty straightforward decision! We all knew that we wanted to tackle the ‘horror genre’ for our next piece of work – the endless possibilities for comedy within this was really exciting for us. We narrowed down the selection to a few titles (Dracula, Frankenstein, The Invisible Man, Macbeth and The Hunchback of Notre Dame) and we filmed a really quick 60 second clip of us just improvising some ideas for each one and put them up on our social media accounts. We used the public’s responses to help inform us which title we should go for. Dracula was the overwhelming favorite and we already had loads of ideas milling around in our heads. We always like to please our audiences!

Why make it a comedy?

We all studied clowning together at university and the module struck a cord with us. Making accessible work has been at the centre of our ethos right from the very beginning and comedy is the perfect genre to do this, especially physical comedy as it has universal appeal. The main reason we do what we do is that we simply love to make people laugh. Everyone should be able to enjoy theatre and that is exactly what we hope to achieve so taking well known stories and turning them on their head with a comedic twist is the perfect way to do this. Whether you’re a seasoned Le Navet Bete fan or are brand new to our work we really hope you can make the show- it’ll be unlike any other Dracula you have seen before! 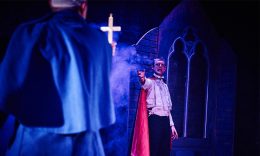 What can audiences expect?

Featuring all the main characters you’ll recognise from Stoker’s classic (and some you won’t!) Dracula: The Bloody Truth is a fast-paced, side-splittingly funny comedy that includes farce, slapstick and a healthy dose of silliness, all wrapped up in an adventure story that takes you from the awkwardly charming seaside town of Whitby to the dark and sinister Transylvanian mountains. Whether you’re 8 or 108 there’s something in the show for everyone to enjoy and we promise to have the vampires back in the ground and leave audiences flying high!

What has been the funniest moment so far that has happened on or off stage during your time together?

There are so many! Too many to count. Well, off stage…we were driving through Andorra heading to Spain. We were in our van in the middle of the night around very treacherous and winding mountain roads when we got to the border checkpoint for Spain. Matt was asleep in the back when suddenly the back door flew open and a Spanish policeman got in the back with a machine gun pointing right at him. Matt immediately woke up from his deep sleep, saw the man and began to jump and prance about (still half asleep) shouting “Teatro! Teatro! (Theatre, theatre!)” while we were trying to explain to Matt that it was just a routine check and if he didn’t shut up he’d probably get shot!

On stage there have been lots of funny moments but one that stands out was at the Edinburgh Festival performing our first show. The show was in a tiny venue and Al did a cartwheel, catching his foot on one of the strip lights on the ceiling which immediately shattered and fell all over the stage – in the middle of a musical / acrobatic moment of the show! Nick stopped playing the mini grand piano at the side of the stage, everyone looked at each other, at the audience. Quickly Nick started playing again whilst the others all ran onstage with brooms to sweep up all of the glass in character. We just carried on after that. The director of the venue was watching that show – but he thought it was hilarious!! 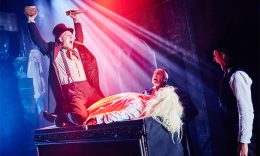 What makes you laugh?